I recently had the pleasure of catching up with Avery Swartz — web designer, founder and lead instructor at Camp Tech, technology expert for CTV News, Leslieville resident and mom to two-year-old Clara. This tech mom and I chatted about her evolution as an entrepreneur, technology and how parenting changes the way you work.

A Marriage of Technology and Art

Avery’s career path is not what you might expect from someone so versed in technology and so fluent in code. She comes from a fine arts background, with a degree in performance and theatre. She worked for many years on the Toronto theatre scene as both a producer and a publicist. It was while working at the Taragon Theatre that she first began “messing around” with building a website. So she totally gets what it’s like for small business owners who want to do things themselves. She also understands the challenges. She laughs as she recalls how she once totally deleted the Taragon’s website.

Technology Should be Fun

After dabbling in graphic design, she found she really enjoyed it and ended up getting her graphic design credentials. Her real love is web design, where she gets to combine her artistic side with her geeky programer side. Avery’s gift, beyond her design sense, is her ability to make technology accessible to the lay person. She prides herself on avoiding jargon and making things clear and simple.  Avery believes that technology should be fun.  There is so much to know about technology, you couldn’t possibly know everything. So you have to approach technology as an adventure.

Camp Tech, which she founded in September of 2012 is a natural evolution in her business. Camp Tech provides training to individuals and businesses on WordPress, social media, inbound marketing and more in a friendly and fun environment. There is no jargon and no dumb questions. Avery teaches half the classes and has recruited experts in other areas to teach the other half.

Avery refers to herself as and “entrepreneur turned mom” rather than a mompreneur. She ran her web design business for five years before the birth of daughter Clara. The biggest adjustment to the way she works since becoming a tech mom has been time management. Now she is a super-effective multi-tasker. When asked about finding balance between work and family, Avery says things are always messy. Things are mostly great, but they aren’t great every day and you can’t expect things to be awesome all the time. And when she feels she is being pulled away from her daughter because of her work, she finds comfort in the fact that it’s work she said yes to, that it’s on her own terms. When it comes to the time she spends with Clara, getting messy and playing around, she finds that it’s those moments that are most electrifying and energizing.

Running her businesses from home, Avery spends a lot of her time in her Leslieville neighbourhood, which she loves. In Leslieville, she’s found a strong group of entrepreneurs who, united only by geography, are very supportive and non-competitive. Because she lives and works in the area, she’s gotten to know a lot of the shop keepers and business owners.

Leslieville is also a great place for kids. It’s a highly walkable neighbourhood. And so many of the businesses are kid friendly. You can feel comfortable going out for a meal with young kids.

Her favourite places to go in Leslieville with daughter Clara  are to any of the three nearby parks and the public library, “She loves it,” says Avery. “Walks in like she owns the place.” 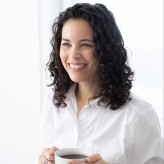 Tamara loves children’s books, running, and pie. After nearly a decade working in children’s publishing, she launched Puzzle Box Communications - an agency offering editorial services to small businesses. Running her own business affords her the luxury and pleasure of walking her two children to school, and gives her the opportunity to rediscover her Midtown Toronto neighbourhood.